BEAVER ISLAND-Long known for its excellent largemouth bass and bluegill fishery, Beaver Island’s Lake Geneserath is destined to become an angler’s hotspot for another popular game fish species-walleye, thanks primarily to the work of a dedicated group of sportsmen and women on the Lake Michigan island. 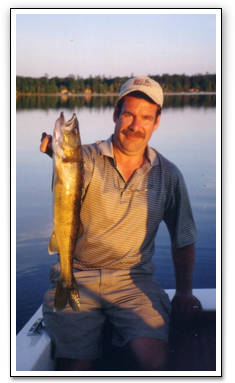 “Offering both the residents of Beaver Island and our seasonal visitors another recreational opportunity, especially something that would offer additional off-season fishing opportunities, has been a dream of the Beaver Island Wildlife Club since 1991,” said Jeff Powers, president of the sportsmans group.

“It looks like that dream is finally coming true,” he said, grinning, as he held up a beautiful 23 inch walleye, estimated to be four years old.

But the dream wasn’t easy being realized. “Although we knew from previous stocking efforts made by the Michigan DNR that Geneserath had both the habitat and food sources walleye need to thrive, survival was never very good, because the DNR stocked tiny walleye fry that proved to be great table fare for the bass and other fish in the lake,” Powers, also the island’s veterinarian, explained. “That’s when we knew we needed a walleye pond that we could nurture the fry to fingerling size in.”

But the pond had to be more than just a hole in the ground with water added. “That had been tried, too,” Powers noted. “But without adequate fencing to protect the young fish from mammalian predators, birds, and snakes, they didn’t survive, either.”

With the assistance of DNR Grant Coordinator Linda Hickstrom and Fisheries biologist Tom Rozich, the group received a Michigan Inland Fisheries grant totaling $5,276 in 2000 for construction of a new pond, which the Wildlife Club supplemented with another $12,700 of their own funds. “You know that saying about boats being holes in the water surrounded by wood into which one pours money?” asked Powers wryly. “Well, by the time we got done excavating the pond, placing a pond liner to retain the water, putting in a pump for the water, and fencing the entire pond, that’s what we’ve got here. But it’s been worth it.”

The group has raised and successfully released more than 15,000 walleye fingerlings since the pond’s inception. A recent warm, calm night on the quiet semi-wilderness lake produced more than a dozen eager fish in less than three hours, most in the 16-18 inch range, as well as the larger 23 inch fish.

“And this hot summer weather isn’t really what I’d call good walleye fishing weather,” Powers laughed. “I expect the fishing, from the looks of these younger fish, to be even better this fall and next winter through the ice.”

Refusing to take any personal credit for the success of the effort, Powers instead praised the other members of the Wildlife Club and the approximately 500 year around residents of the island. “A lot of people have worked very hard to see this happen. And eventually, we may not even need the pond-some fish were seen near the mouths of two creeks on the lake this past spring, indicating there may be some natural reproduction going on.”

“Let’s hope so. But we know one thing for sure-the best is yet to come.”